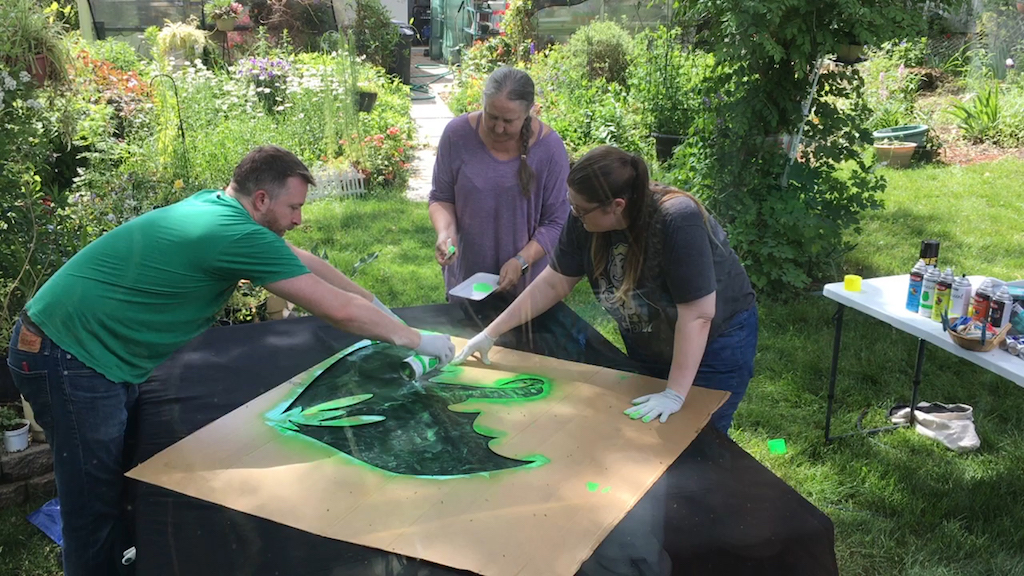 Wizards Touch Designs is more than jewelry and photos. With our new organization we are doing special requests and projects from many unusual sources. Recently we had one straight from Norse mythology.

One of our artists belongs to a group that takes part in a celebration called Burning Man. The gathering is dedicated to universal inclusion and art. The emphasis of his camp named Vahalla, is portraying Norse viking traditions. This year among other things to call attention to their area, they wanted glow-in-the-dark banners of a kraken and an outer space dragon. So the challenge was given to Wizards Touch.

After many sketches and back-and-forth decisions, (Just how many legs does a kraken have?) the figures were designed. The drawings were then put into digital form. At that point stencils were cut out of large pieces of cardboard using a computer controlled laser cutter. Computer precision was needed because there were stencils for both the outside and inside of the figures that needed to line up perfectly.

We wanted to develop as much of a 3D illusion for the banners as possible so several layers of a black gauze-like material was used. Instead of traditional print or paint methods, the color was applied with luminous paint using a process called sponge daubing. This way the amount of paint that worked its way to the various layers was different creating the 3D effect.

The final step was spray painting a very light, watery background for the karaken. The space dragon had a background of stars, planets and dragon’s eggs.

The night-time effect of black light on the banners at the Burning Man celebration was every bit the attention getter they had asked for.